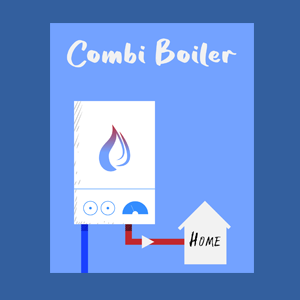 What Type Of Boiler Do I Have?

For something so integral to our day to day lives at home, us Brits don’t seem to be as clued up with our boilers as we should be.

That’s what’s been revealed in a recent survey conducted by Worcester Bosch, which found that over half the nation has never asked for the service history of a boiler when moving into a new home. What’s more, the survey revealed that 18% of people believed that servicing was unnecessary – until their boiler actually breaks down.

We feel these figures are only down to the fact that we’re just not quite as familiar with our boiler as we would like. Perhaps it’s not surprising though – how many of us really know the difference between a Combi and a Conventional boiler, or why your neighbour’s boiler has five pipes, but yours only has three?

Having a greater understanding of your boiler not only will make you sound more clever in front of your friends, but it can also help you spot any issues or problems much earlier on.

The quicker an issue can be identified, the quicker a gas boiler engineer can act and prevent any bigger issues from occurring –  which could help save you lots of money in potential gas boiler repairs and replacement costs too!

Fortunately, we’re here to give you a rundown of the three most common types of boilers found in UK households.

What is a Combi boiler?

Short for ‘Combination boiler’, a Combi is the most common type of boiler you’ll find in a UK household, with around 70% of Brits owning one. They’ve gained popularity over the years due to their ability to work without the need to also install any water tank in the attic or roof of your home, giving homeowners the added bonus of more space.

Combi boilers don’t require a water tank or hot water storage cylinder because they work by simply heating the water directly from the mains. This means that the water in your home is only heated when you need it; which is good news for those looking to be more environmentally friendly, and cut down on their energy bills at the same time!

The only real downside to a Combi boiler is it can’t handle two water outputs at the same time. Have you ever been in the shower and the water has suddenly turned freezing cold because someone has decided to do the washing up in the kitchen? Then you almost definitely have a Combi boiler in your home!

Other signs that point to you having a Combi boiler are its size – they are usually smaller and more compact than some of the other boilers available. As such, they’re usually found in small to mid sized homes. If you live in a 4+ bedroom home, then you likely won’t have a Combi boiler, as they simply won’t be powerful enough to manage all of your home’s hot water and heating needs.

What is a System boiler?

If your boiler only has three pipes coming out of it, then you can be pretty sure that you’re the owner of a System boiler. While not as common as a Combi boiler, they’re often found in larger properties due to their ability to handle more than one water source at once – meaning you can shower while the washing up gets done, with no issue at all.

With this added power comes some additional parts, namely in the form of a water cylinder. This cylinder, which is normally found in the airing cupboard of your home, holds the hot water that allows you to use multiple water sources. However, if you use water faster than your system boiler can reheat it, you’ll have to wait for it to warm up before you can access hot water again.

What is a Conventional boiler?

The only downside, as well as requiring a lot more space, is similar to that of a system boiler in that if the hot water in the tank runs out, you’ll need to wait for it to heat up again. While this isn’t great when it happens right before you need to jump in the shower, conventional boilers do have an advantage over combi boilers in that they can handle water usage from several points at once.

Boiler servicing for all types of boilers

Now you know what type of boiler you have – but do you know who to call when it comes to servicing or installing a new boiler? With our team of dedicated, local and highly trained service engineers, your boiler is in good hands. Contact us today to find out more.